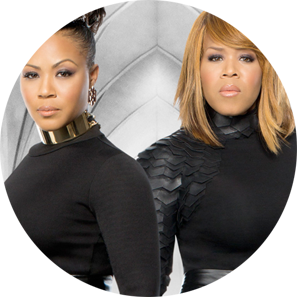 Mary Mary is the multi-Grammy® and multi-award winning Gospel recording, sister duo of Erica and Tina Campbell. The sisters broke through in 2000 as Mary Mary with the pioneering hit “Shackles (Praise You).” Mary Mary has earned numerous Stellar & Dove Awards, four Grammy® Awards, three NAACP Image Awards, two American Music Awards, a Soul Train Award, a BET Award, the BMI Trailblazers of Gospel Music Award, ASCAP Golden Note Award and more. After seven Mary Mary albums and a lifetime–18 plus years of professionally singing–the commercially successful and critically acclaimed Mary Mary has sold more than 5 million albums, toured internationally, graced the covers of multiple high-profile magazines and both have recently launched successful, award-winning solo careers. Erica Campbell’s solo debut album, Help, won a 2015 Grammy® Award for Best Gospel Album. Erica is the host of the nationally syndicated radio show, “Get Up! Mornings with Erica Campbell.” In 2015, Tina Campbell independently released her solo debut album, It’s Personal, winning the 2016 NAACP Image Award for Outstanding Gospel Album. Her single, “Too Hard Not To,” from her follow-up album, It’s Still Personal, received a 2018 Grammy® nomination for “Best Gospel Performance/Song. Erica and Tina continue to perform as Mary Mary while embracing their solo careers. They are loving wives and mothers who are devoted to their faith and their families. 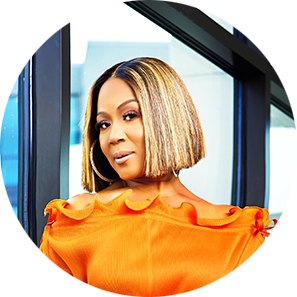 Erica Campbell has released two solo albums as well as seven albums with her sister as part of the dynamic duo “Mary Mary.” Campbell has received numerous awards and accolades. Her debut solo album “Help” won a 2015 Grammy Award for Best Gospel Album as well as eight Stellar Awards. Campbell is the host of the nationally syndicated radio show “Get Up! Mornings with Erica Campbell” that can be heard weekdays 6am-10am EST in about 40 markets, while ministering internationally.

Erica Campbell is the author of the book “More Than Pretty: Doing the Soul Work that Uncovers Your True Beauty”, which is available now. In the book, Campbell speaks to women of all shapes and sizes, demonstrating that true beauty is found not in external appearances, but in celebrating the person God made you to be.

Campbell is married to Grammy Award-winning producer and pastor of California Worship Center, Warryn Campbell II, and they have three children — Krista, Warryn III and Zaya. Her compelling song “Positive” is available for streaming and digital download on March 18th. Be sure to connect with Erica Campbell on social media at @imEricaCampbell. 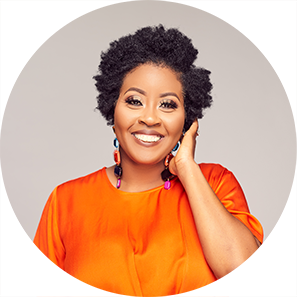 One of the most sought-after vocalists in contemporary gospel, Lena’s soulful and extraordinary vocal prowess has caught the attention of musicians and artists alike.

Her gift has opened many doors. She has shared the stage with such luminaries as Tye Tribbett, Lalah Hathaway, Deitrick Haddon, Dorinda, John P. Kee, Doobie Powell, the late Thomas “TC” Clay, and more. And she was privileged to sing with the legendary Edwin Hawkins as part of the New Edwin Hawkins Singers—where it all began.

More than an artist, Lena is a wife, daughter, sister, friend, and licensed hairstylist with a unique ability to connect with people. Her innate comedic prowess and infectious laugh draw you in, but her compassion for mankind will cause you to appreciate her heart.

By taking the torch of the legendary Hawkins family, Lena is continuing the journey of the rich heritage of Gospel music by representing the new sound of the Bay. 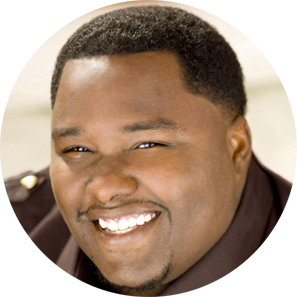 Life for Jason Champion is no coincidence.  The Cleveland, Ohio native husband and father of two sons, has spent over a decade honoring his faith and following a path to his destiny. Music was present in the Champion household, primarily from Jason’s father, an elder in the church. Although he spent weekends with his father involved with church, it was a New Edition concert that sparked Champion’s desire to perform.  He aspired to share in the experience of being on stage.  Soon after, accompanied to the show by his friend David Tolliver (nephew of then famed Cleveland radio programmer Lynn Tolliver) the duo would continue singing as teenagers until being discovered by Gerald Levert.

By the 11th grade Jason and David became the R&B group Men At Large.  Their self-titled debut album and their follow up recording, One Size Fits All catapulted the young duo to the stratosphere singing, traveling the world and enjoying all the perks that being young recording stars afforded them.  In 1996 the duo parted ways professionally allowing Champion to pursue a solo career in Gospel Music eventually connecting with Gospel trailblazer Kirk Franklin, with whom he was previously acquainted during the Men At Large era, Champion contributed to Franklin’s Hero album and tour in March 2005.

After two years on the road, touring and singing with Franklin, Champion connected with former road manager, Leonard Brooks (Brooks Entertainment Group) who vowed to create new opportunities with him as a solo artist. Champion embraced the new challenge and drew upon his relationship with Grammy award-winning producer Warryn Campbell. Campbell produced Champion, alongside his wife Erica, Eric Dawkins, and Gerald Haddon, and showcased Champion’s personal testimony into a complete body of work titled, Reflections.

In 2009, Champion’s first solo album received industry recognition by The Recording Academy earning his first Grammy Nomination for Best Gospel Album of the year. Champion’s single went on to reach #1 on Billboard’s Gospel Single Charts. The album later released in Japan expanding his ministry with the success of two tours in Osaka and Tokyo including performances at Billboard Live.

Jason Champion prepares for this next chapter in his life. He has since signed with My Block Inc. and is now preparing for the initial offering entitled Until Forever. Until its release, Champion is continuing to be faithful and obedient to the God he serves.

“I want to be known as a man that lives with integrity, loves fearlessly, laughs perfusely & honors God faithfully.”  ~ Jason Champion 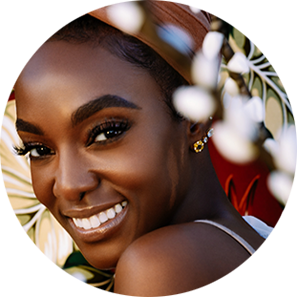 JoiStaRR, also known as Joi Campbell, can descriptively be summed up as an “it girl.” She was handpicked to tour with one of hip-hop’s creative geniuses, Kanye West, and has since become a Grammy-nominated songwriter and actress. She has written songs with a variety of artists including Chris Brown, Mary J. Blige, Kelly Price, Estelle, Musiq Soulchild, Mary Mary, Brandy and more. You can also hear her distinct vocals gracing records with artists of all genres including PJ Morton, Vindata, fun., The Game, Rick Ross, Dr. Dre and Ghostface Killah.

Now JoiStaRR is focusing solely on her own music and her passion as an actress. She starred in the Harlem drama “Strive” alongside the legendary Danny Glover, and was a cast member on TV One’s docuseries, We’re The Campbells. Focused on taking her artistry to the next level, JoiStaRR is definitely one to watch. Connect with her on social media at @JoiStaRR. 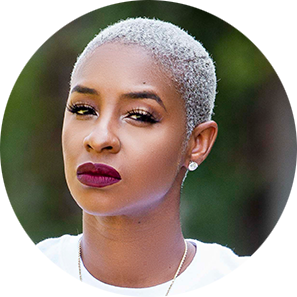 There are few who can rock sequin and fur fanny packs with conviction, but when you’re settled in your skin like Toni Estes, you can pull off just about anything. Dookie rope chains, a champagne cropped fade, polka dots and plaid. Yes – if her clothes and accessories are any indication, Estes embodies all that is eclectic. From her photography business to her YouTube channel and Facebook Live series, ‘Marriage in Real Life’, Estes is an open book of love, light and laughter.

With her down-to-earth nature and inviting approachability, you’d never know Estes has written for the likes of Whitney Houston and sung theme songs for breakout shows like All of Us. Most recently, the Grammy-nominated sister-mommy-friend appeared alongside My Block Inc. labelmate Erica Campbell in the TV One show, We’re the Campbells and talked work-wife life on Campbell’s nationally syndicated radio show, Get Up! Mornings with Erica Campbell.

Stellar Award Nominated Gospel Artist Jason McGee & The Choir is a collective group of individual singers and artists who’ve come together to reach the world through music, fashion, and entertainment. With their contemporary presentation, they seamlessly bridge the gap between the traditional choir and modern day sound.

In 2016, Jason McGee & The Choir signed with mega producer Warryn Campbell’s record label My Block Inc., under which their 1st single “Promises” (released in 2018) peaked at #8 on the Gospel Charts and was named one of the top added Gospel songs to radio, according to Billboard. “Never Let Me Go” (released in 2019) earned them a Stellar Award nomination for “Contemporary Choir of the Year” while the ballad “It’s Not Over” has already promised to be one of the breakout choir songs of 2021. Their debut album entitled “Power” released July 30, 2021

Jason McGee & The Choir have a very clear mission and purpose: “Be All Things to All People, All the Time”.

Stellar Award-winning and Grammy-nominated siblings, The Walls Group, are this generation’s most culturally relevant gospel crew. Members Darrel, Rhea, Alic and Ahjah have been making a major impact in the music industry for over a decade and are still discovering new and bold ways to use their voices.

Ministry is the heart of The Walls Group and singing is the vessel in which to tell of the good news. Having worked with PJ Morton, Brandy, Frank Ocean, Kirk Franklin, Jonathan McReynolds & more they’ve proven that their youthful and powerful voices stand toe to toe with some of the leading artists across genres today.

It’s said that “Everything’s Bigger in Texas” and that was not missed on this Houston based family. Their family is big (the group represents four out of 8 children to Roger & Alicia Walls), their sound is big and their individual personalities are even bigger. Outside of music, The Walls are maximizing their talents through hosting, content creation and ministering.